A notable headwind for U.S. corn prices over the last several weeks has been export demand. We’ve discussed the implications of a weaker Brazilian Real here on our blog, and on social media before – but, with some unexpected political developments in Brazil lately, we thought it would be worth revisiting today. 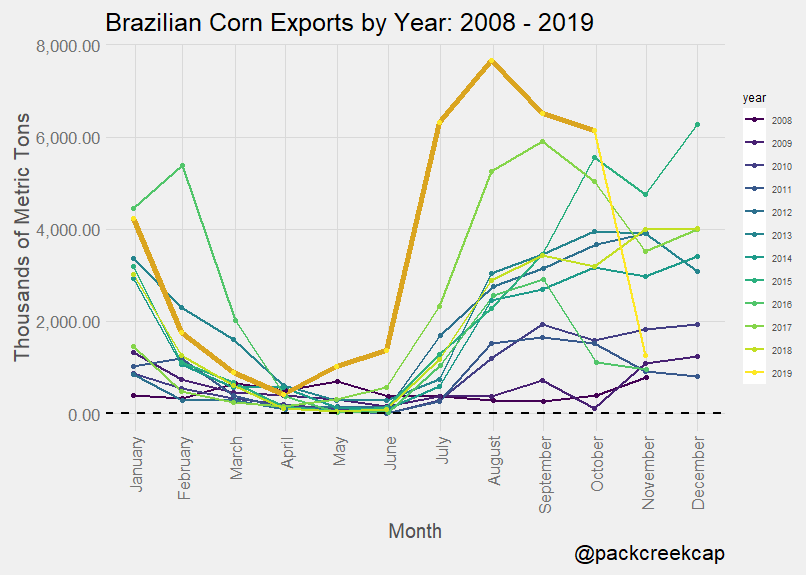 Since export figures for the month of November aren’t complete, we left it a lighter shade of yellow. However, you can already see it right up there with the monthly pace for years like 2009.

What’s been the main reason for such a strong export pace as of late? The weakened Real has continued to make export attractive. The currency, after a period of sub – R$4 trade, rocketed up again last week. This time, it was off of news that the jailed former President, leftist Luiz Inácio Lula da Silva (“Lula”), was to be released from custody. A threat to President Jair Bolsonaro’s pro-market right-wing government, Lula’s release was a cause for a break above R$4, where the currency has remained since (as of this writing).

So, a weaker Real has been a damper on export demand. We’ll see if any major increases in corn export sales occurred this week tomorrow morning, but the numbers continue to show relative weakness in American corn prices to other major exporters: 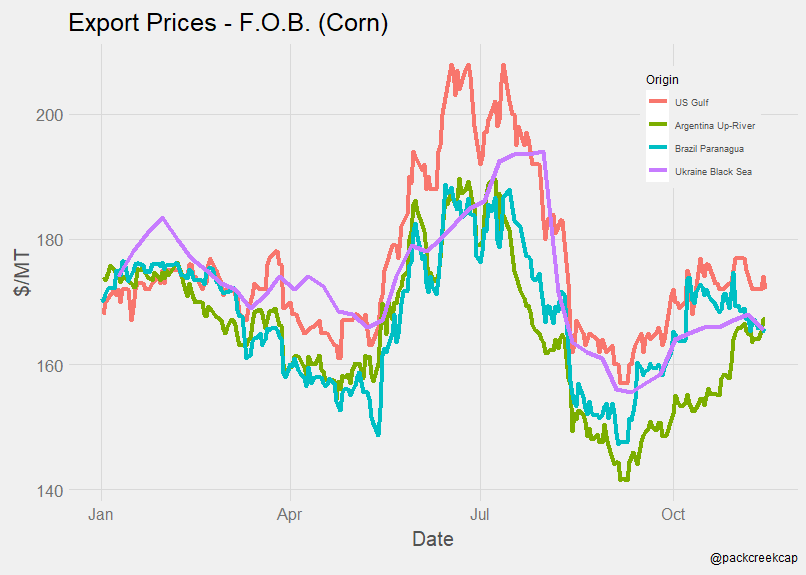 The Brazilian Real, and its Impact on American Export Demand

As harvest rolls across the United States, some interesting trends have developed in the corn and soybean markets’ fundamentals. Soybean demand has been carried by Chinese purchasing and lessening of trade tensions.

Corn demand has been noticeably poor, however. Demand from ethanol production has been tepid, certainly; a major problem has been an unseasonably weak export demand for American corn overseas.

There have been several headwinds facing corn exports in recent months; not only are we dealing with the hangover from the runup of prices during the summer rally tamping down demand, we are dealing with a political situation in Argentina that has prioritized exporting corn now before the new president, Alberto Fernández, assumes power in December.

What has been particularly burdensome for export demand has been from Brazil, however – and the impact a weaker Brazilian Real has had on American corn’s competitiveness in the global markets.

Despite some recent strength, the Brazilian Real is historically weak against the U.S. Dollar at present. 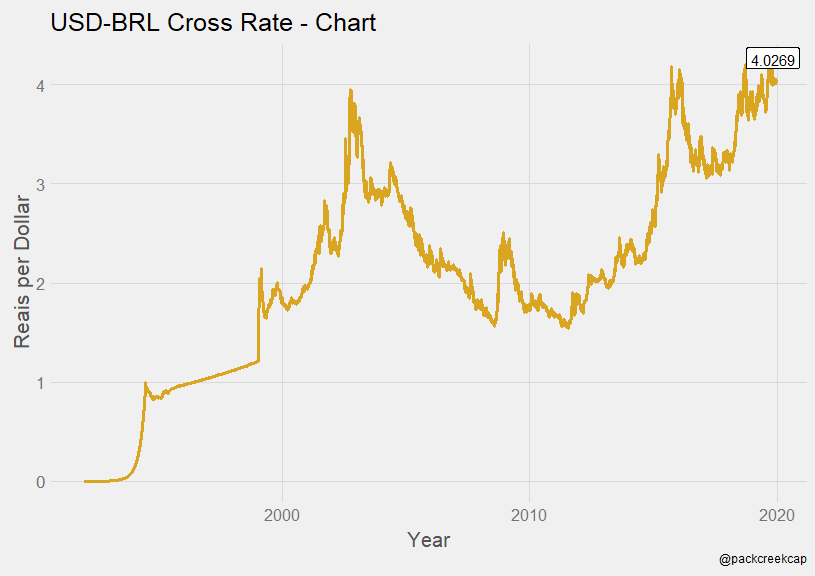 What explains the dollar’s strength against the currency? Beyond the recent strength of the U.S. Dollar to other currencies (we won’t be getting into this today), much of this stems from a lack of investor confidence in the Brazilian economy in recent years.

After 2009, and for several years after, foreign direct investment in Brazil picked up as investors shifted focus to emerging market economies. Brazil, with a pro-market government and Latin America’s largest population, was a popular choice for many looking to invest in emerging markets. 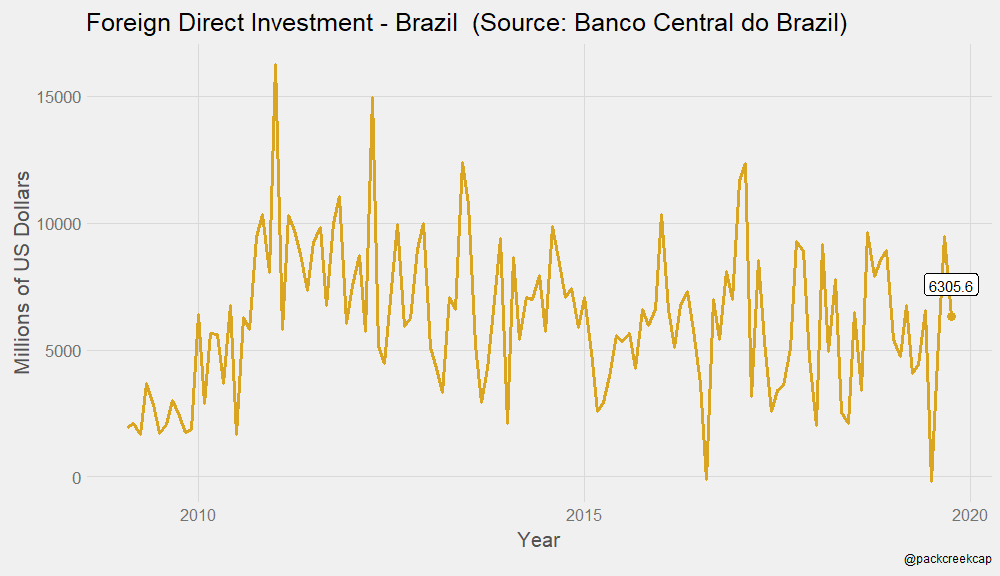 However, weakness began to develop in Brazil in the back half of this decade. Among other things, falling commodities prices and massive corruption investigations against the highest levels of the Brazilian government contributed to a recession lasting from 2014 – 2017.

Naturally, these developments were a damper on investment – and a damper on the Real. A weakening Real meant that exports paid for in the Brazilian currency were cheaper when bought with U.S. dollars; this contributed to stronger export demand for Brazilian commodities like sugar, ethanol, corn, and soybeans (among others).

There are signs that this trend is reversing now, however. The Brazilian government returned to pro-market policies with the election of Jair Bolsonaro in 2018; his signature policy plank in the election – reforming the nation’s ballooning pension system – recently passed the Brazilian Senate and is on its way to his desk. Managing debt has been a priority for market-friendly politicians like Bolsonaro for some time, and recent moves like this have offered some strength to the fundamentals of the Real.

Global macro trends also support a stronger Real, as well. With record-low interest rates in developed nations, the search for yield inevitably will look increasingly at countries like Brazil. A potential turnaround in emerging markets will produce less-favorable conditions for export demands as the currency appreciates against the dollar, however.

For American ag producers, it could be reason to celebrate: with Brazilian stockpiles of corn and soybeans running low, a strengthening Real would be a headwind to continued export business out of Brazil. Weakness in the Real has also depressed global sugar prices; Brazilian ethanol is primarily made from cane sugar. Higher sugar prices would de-incentivize ethanol production, and potentially boost American ethanol exports, as well.

February 8, 2019 in Commodites and Hedging

By Taylor Ortiz and Eric Oeth

While February 8 USDA WASDE reports were less than thrilling, the team here was beyond exciting for something to focus on so we decided to pick apart a few commodities that still had interesting talking points. Here we go!

The USDA’s reporting on wheat contained a few minor surprises on the global wheat situation – namely, that despite rumors of an imminent slowdown of Russian wheat, the USDA pegged 18/19 wheat exports from Russia a half-million metric tons higher than in December.

The FOB bid for the Black Sea is currently slightly higher than the US HRW 11.5% Gulf bid (see below); whether this translates into increased export business for US wheat – which many have been expecting as Russian supplies become thinner – remains to be seen.

One other minor surprise came from the adjusted export figures as well released today. While the adjusted Russian number isn’t terribly surprising, the fact that 0.7 of the 1.3MMT net increase in estimated global wheat exports for the 18/19 year would be coming from Pakistan, was.

Earlier this week, Pakistan issued a rare tender to export 0.25m tonnes of wheat. As reported in private media and the Grains Report, this export tender could be subsidized by the Pakistani government. Wheat is the main staple in Pakistan, and the government maintains a strong hand in the marketing and trade of the grain. A move towards subsidized exports reflects lessening concerns over inflation and food security in the country.

The discussion is around corn exports vs. corn usage in the United States. A cooperative told us they are questioning if supply can meet global demand as we see the potential for year-round ethanol blending, improved trade with China, and increased export of corn from Mexico. In addition, in 2018 the EU turned into a net cereal importer for corn for the first time in a decade.

However, within the EU we are keeping our eye on Romania. The World Ag Report published on February 8 highlights Romanian corn as Romania experienced a record yield and now represents 23% of EU corn production.

In 2017-2018, Romania surpassed France as the EU’s largest producer of corn. In addition, this past autumn Swiss-based grain and fertilizer trader Ameropa finished investing and expanding the Chimpex terminal at the Port of Costanta, increasing grain storage by 60%. With Romania having the benefit of the Black Sea, EU policies, and increased technology usage toward yields, it is undoubtedly able to increase its place in global production. Romania may be a thimble in production now, but this is a country worth watching. Besides, currently global corn use is exceeding global supply.

The crop of the year for mainstream news. With focus on Brazil as opposed to China, the World Ag  Report published stated that Brazil soybean production for 2018/19 is estimated at 117.0 mmt down 5mmt or 4% from December and 3% from last year’s record. Harvested area is estimated at 36.1 million hectares, down slightly from December, but up 3% from last year. Our favorite takeaway is the visual the USDA presented on the MODIS Normalized Difference Vegetation Index (NDVI). It demonstrates that vegetation conditions declined in some soybean-growing areas of western Parana, Goias, Mato Grosso du Sul and Mato Grosso. However, in other areas yields are estimated above average.  A majority of Mato Grosso was not affected by drought and received adequate rainfall with yields estimated above average. This caught our eye as we often blanket Brazil as ‘drought land’ these days. This is all available here in case you missed it: https://apps.fas.usda.gov/psdonline/circulars/production.pdf

Brazil, riding a wave of higher production, is slated for record-setting exports this marketing year. Amid global demand increases, and China’s building of cotton stocks, the USDA expects Brazilian cotton exports to reach 1.35 MMT in the current marketing year. This figure would be 6.8% higher than December’s export estimate, and almost a 49% increase from the 17/18 marketing year.

Meanwhile, China, the largest producer, and second-largest importer of cotton, is estimated to have a record  year for yields, alongside slightly lower acreage estimates compared to the prior year. Stocks in the country are low, necessitating imports from, primarily, Brazil; tariffs on American cotton and ongoing concerns over the quality of Indian cotton have made Brazil the buyer of choice in recent months, per the Cotton World Markets and Trade report.

A-Index and U.S. cotton spot prices are almost unchanged in the latest report. Trade is pegged 600,000 bales higher from the December report off of, in addition to stock building in China, higher expected imports from Turkey and Pakistan. At the same time, global production is estimated to have declined by about 300,000 bales.

And that’s the news!