Whirlwind Week in Trade: Timeline of Negotiations Between U.S. and China

Those following trade negotiations between Beijing and Washington this week would be excused for losing track of what was going on somewhere along the way. While concerns over the U.S.-Chinese trade deficit had been a focal point in President Trump’s campaigning and policy making since he entered politics, the events of the last few weeks came as a shock to many; it seemed for a while like a major new headline on the talks was coming out every minute. Commodity markets, consequently, were on edge this week as the talks were underway.

While this whirlwind week for commodities is finally coming to an end as we come into Memorial Day weekend, talks are ongoing, and it doesn’t appear much of substance has been officially hammered out by either side. What we do know: there is no trade war (yet), nothing appears to have slowed down the young commodity bull (yet), and we will have to wait and see about the risk of further tariffs spoiling the markets’ mood.

The recent discussions between Beijing and Washington over tariffs had been preceded by months of poor trade relations on both sides of the Pacific.  The Trump administration had previously imposed a wide assortment of tariffs on a variety of Chinese products; this led to Beijing, among other things, stopping purchases of U.S. soybeans in early May.

As news over the cancelled United States/North Korea summit in Singapore have snapped back to the top of the headlines, let’s take a moment to give a quick rundown of the headlines regarding the last month of negotiations between Washington and Beijing, particularly as they relate to commodity markets:

May 10, 2018: “China’s ZTE may be first major casualty of trade war with US” (The Guardian)
After the Trump administration forbade U.S. firms from dealing with Chinese smartphone giant ZTE, the company was forced to suspend major business activities due to an inability to source materials from the United States.

May 18, 2018: “China Said to Offer President Trump a $200 Billion Cut in U.S. Trade Deficit” (Fortune)
One of President Trump’s main campaign promises was to reduce the trade deficit with countries like China. Media reports on the 18th widely reported that both parties had come to agree to a reduction of the U.S./Chinese trade deficit – and, at $200B, it was an eye-popping number. However…

May 20, 2018: “U.S. Suspends Tariffs on China, Stoking Fears of a Loss of Leverage” (New York Times)
On May 20th, agricultural futures markets were up on news that there was a breakthrough: the Trump administration suspended tariffs on China.

May 21, 2018: “‘We’re putting the trade war on hold’: Steve Mnuchin says US has paused China tariffs following Washington meeting” (South China Morning Post)
The next day – another up day for agricultural commodities: the trade war was temporarily called off, according to U.S. Treasury Secretary Steven Mnuchin. 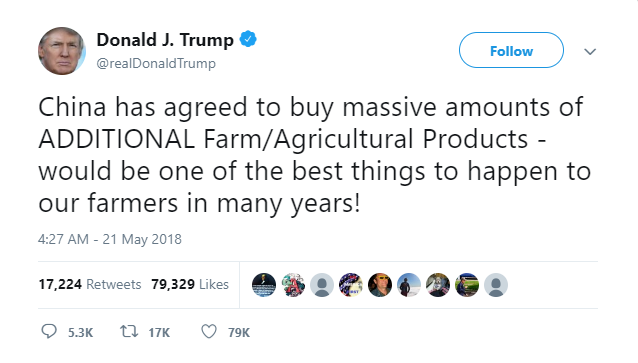 In typical Trump Twitter bravado, the president announced that China would be buying more ag products from the United States. Markets jump once more on the news.

May 23, 2018: “Opinion: My farm crops gained $45K in value since Trump delayed China trade war — but it’s not a done deal” (The Hill)
In an opinion piece for The Hill, Iowa corn farmer Tim Burrack documents the impact the talks had on corn prices, and his perspective on the headlines coming out of Washington.

May 25th, 2018: “The weird zigzags of a ship trying to navigate the U.S.-China trade war” (CBC)
One of the most interesting looks at the impact trade talks have had on global markets: how the headlines impacted the course of the RB Eden, a ship transporting sorghum from Corpus Christi, Texas, to Shanghai. The Eden made it by the Cape of Good Hope around South Africa, before charting a course for Spain on fears of new sorghum tariffs from China, followed by another about-face just south of Cartagena to Singapore on news of thawing relations between Beijing and Washington.

It’s a lot to follow, and it isn’t over yet: CNBC is reporting this morning that Trump could be taking a “harder line on trade” with Beijing now that the summit with Kim Jong Un is cancelled. Stay on top of trade news by following @packcreekcap on Twitter, and stay tuned for more updates on this ongoing situation.

Next Post Should You Be Worried About the Strong U.S. Dollar?