Should You Be Worried About the Strong U.S. Dollar?

While talks of a trade war with China, the U.S.’s NAFTA partners, and the European Union have dominated headlines related to commodities markets over the last several weeks, less attention has been paid to the strength of the U.S. dollar and the impact that has on the attractiveness of American products in global markets.

Compared to other major currencies worldwide, the U.S. dollar has been getting stronger in recent months. This is a result of, among other things, tightening monetary policy from the Federal Reserve in response to concerns about inflation and the strength of the U.S. economy.

While the DXY measures the dollar’s strength compared to major currencies like the Yen and the Euro (which has been flagging in recent weeks due to political concerns out of Italy), economist Erik Norland of the Chicago Mercantile Exchange raises key concerns about the strong U.S. dollar compared to currencies in emerging markets in an article published yesterday on the CME’s website.

Major wheat, corn, and soybean producing-nations like Brazil, Argentina, and Russia have seen their currencies, relative to the dollar, decline in value in recent months. Products for export markets do better when the currency they are traded in is weaker, and the article does a great job showing the impact on commodity prices that result from a weak Argentinian Peso, Brazilian Real, and Russian Ruble.

Brazilian Real: Latin America’s largest economy and agricultural powerhouse has been roiled by weeks of strikes in the trucking and oil industries. Compounding economic concerns in the country has been a weak real, which has declined 15% compared to the USD since January 23rd.
Why it matters: Brazil is a major producer of sugarcane, coffee, corn, and cattle, and as these strikes let up, prices in commodities like sugar and beans could decline once more as exports resume. Combined with a weak currency, this could mean lower prices for these commodities.

Russian Ruble: Like the Real and the Peso, another emerging market currency that has performed poorly against the USD is the Russian Ruble. The currency is down 10% relative to the dollar since January.
Why it matters: Russia is a major wheat exporter, and a weaker ruble makes Russian grains more attractive on the international market. Traditionally, a weaker ruble has been correlated with cheaper wheat: 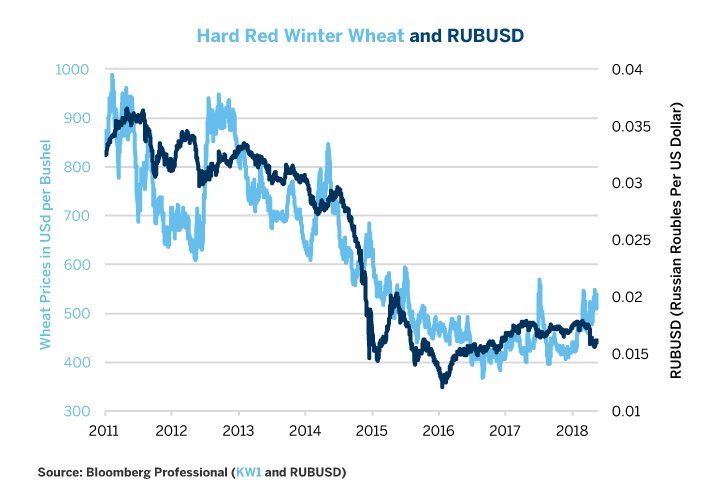 In addition to the impact of currency risk on commodity prices, Erik Norland’s article for CME does an excellent job explaining how these trends may be a bellwether for underlying issues in emerging market economies, and the impact that can have on U.S. farmers. Stay on top of commodity news by following @packcreekcap on Twitter, and stay tuned for more updates from Pack Creek Capital on currencies, commodities, and risk management. #hedgebetter

The full article from the CME can be read here:
http://www.cmegroup.com/education/featured-reports/should-us-farmers-fret-over-falling-ag-currencies-.html

Previous Post Whirlwind Week in Trade: Timeline of Negotiations Between U.S. and China

Next Post Week in Review: USDA Crop Reports and Markets