Let’s talk about commodity strength. Will we see commodities continue to strengthen vs. equities? Will the pace accelerate? And what about the outlook of a hot and dry summer ahead for grains?

Looking at the Bloomberg Commodity Spot Index in relation to dollar strength, inflation, yields, Fed Reserve tightening expectations and history of historic plunges–this article below breaks out the technical analysis with helpful charts to discuss the trends ahead that suggest an accelerated commodities market as inflation and bond yields increase:

This analysis is by Bloomberg Intelligence analyst Mike McGlone. It appeared first on the Bloomberg Terminal.

Less than three years into a recovery, commodities are gaining momentum vs. the decade-long rally in stocks. Favorable demand vs. supply and a multiyear price decline vs. bottoming equity-market volatility from the lowest in decades should continue to favor commodities. The grains remain stalwart in 2018, yet would need to rally another 80% to match the 2012 peak. WTI crude oil is a bit too hot near $70 a barrel, though positive carry and backwardation indicate an improved landscape.

Metals appear in transition with increasing stock-market volatility, but should prevail in most scenarios, particularly if the greenback remains weak. Sustained dollar strength is a key commodity risk, but unlikely, as the buck’s bounce with increasing bond yields should be limited.

Commodities looking beyond April dollar gain
Despite a sharp recovery in the dollar, commodities’ divergent strength in April indicates their outperformance vs. equities and bonds should accelerate. The 2018 increase of about 3% through April vs. a flat S&P 500 may be just the beginning as the Bloomberg Commodity Spot Index plays catch-up with stocks. Despite the strengthening greenback as the 10-year Treasury revisits 3%, commodities appear to be looking beyond to the coincident inflationary implications of higher yields.

The best month (April) for the Bloomberg Commodity Spot Index in 2018, despite the same for the dollar-spot gauge since November 2016, harkens back to similar disparities in 2005 and 2009. The average commodity-index return in those years was almost 36%.

Hot, dry summer supports commodity perfect storm
After a 10%-plus total return in 2018 through April, the grains lead commodities, with the most reversion potential toward a higher mean. Corn, soybeans and wheat are subject to another bumper North American crop, but harvests at or below trend should spell price appreciation. On a spot basis, the index is up about 15%. A hot and dry summer, weak dollar and sustained OPEC and Russia crude-oil production cuts, along with elevated geopolitical risks, would provide a perfect storm for commodities.

Recovering from good support at the end of March, strong fundamentals favors the metals, particularly if the greenback resumes a downtrend. Crude oil appears the most vulnerable to an overdue correction, but the 22% decline in 2017 set the stage for the current rally.

Reversion may be severe in commodities vs. stocks
There’s little historical precedent for mean reversion in inflation, the dollar and depressed commodities vs. the extended stock market. The last time the Consumer Price Index bottomed from 2016’s similar extreme (vs. its 60-month average) was 1956. Similarly for the trade-weighted broad dollar, the year-ago peak almost matched the 2002 high. CPI is speeding toward a 6% premium since 1995 vs. its five-year mean, and the ratio of commodities vs. stocks is at a high risk of following.

The primary risk is the stock market enters a period of underperformance following the outperformance. With S&P 500 total return unchanged, the Bloomberg Commodity Index Total Return would need to increase more than 200% to match the mean in the ratio between the indexes since 1995 and 2012’s level. 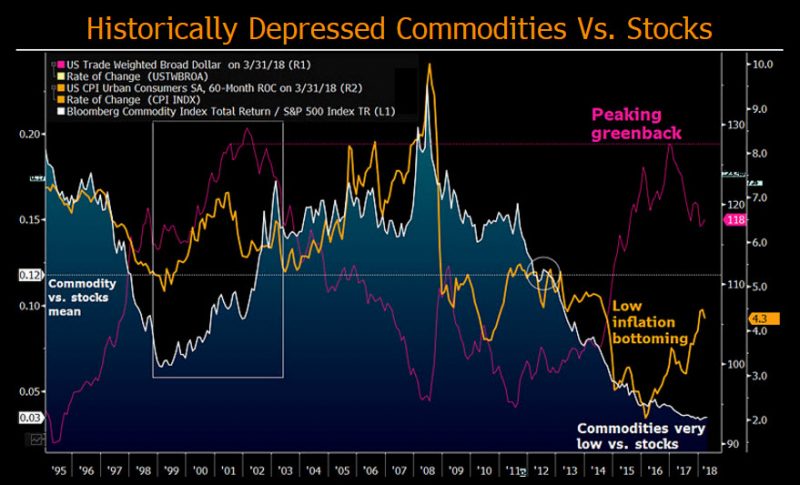 Commodity returns, stocks set to trade places
Barely above its 100-week mean, the Bloomberg Commodity Index Total Return (BCOM) has a favorable risk vs. reward profile, compared with the S&P 500 Total Return (SPXT). In January, the SPXT stretched the most above its 100-week mean since 1999. In the history of the BCOM since 1991, there is no precedent for such a wide disparity in performance. Mean-reversion risks tilted against stocks may not necessarily support commodities on a standalone basis, but physical assets appear to be on sounder footings.

The commodities nadir in 2016 was the worst in the BCOM history. If this limited history is a guide, the market shouldn’t peak until it stretches close to 26% above the 100-week mean, as the stock market did in January. 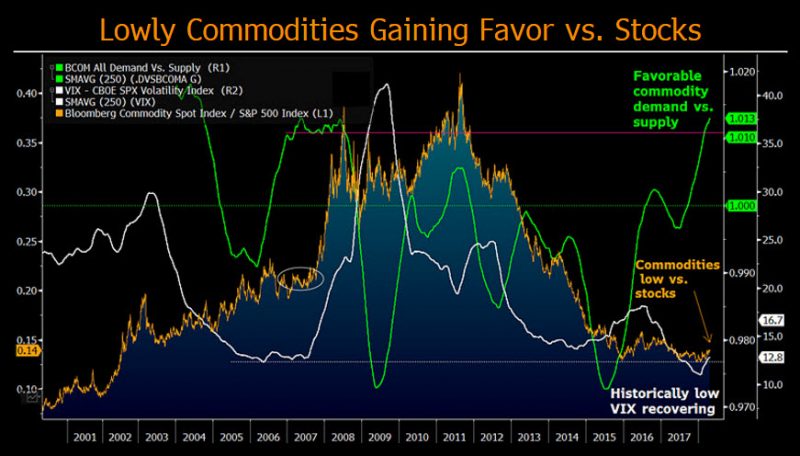 Inflation companions: Rising commodities, yields
Sustained dollar strength may be necessary to suppress increasing commodity prices, but it’s unlikely. Since the 1.36% bottom in the 10-year Treasury yield in July 2016, the Bloomberg Commodity Spot Index has gained 18%, with both reaching multiyear highs in mid-April. Increasing commodities, bond yields and inflation are common companions. So is a weaker currency. The Bloomberg Dollar Spot Index is finally exiting its narrowing cage since mid-January, but faces good resistance within the downtrend.

For about a year, the 36-week moving average has held resistance. It comes in about a percentage point above the April 23 level, also near the 2015 and 2016 lows. From the September nadir to November peak in 2017, the buck rallied about 5% before resuming the downtrend; it’s about 2.6% above the 2018 low. 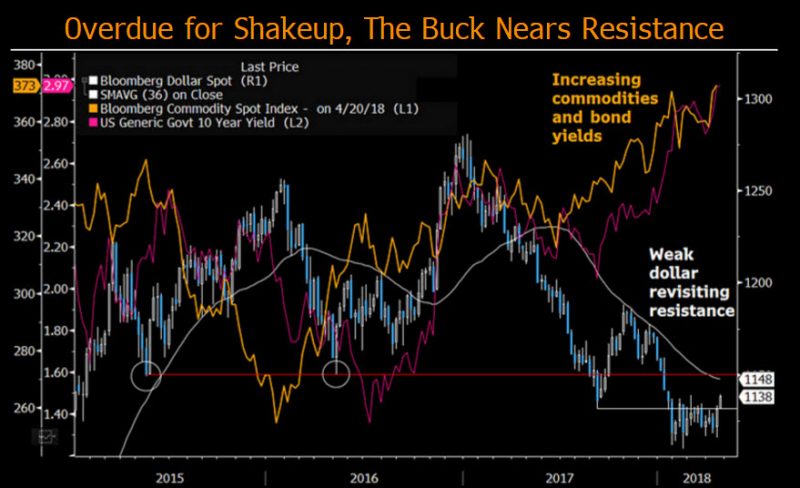 Dollar is vulnerable with record bond shorts
The most extreme level of Treasury-futures net-speculator shorts on record supports a peak in yields and weaker dollar. Managed-money net futures positions in Treasury bonds and 10- and five-year notes last reached a similar short extreme in January 2017. That yield-high lasted for more than a year and marks the peak in the trade-weighted broad dollar since. The position extreme over a year ago was almost 10% of open interest. The most recent is 11%, with the 10-year yield flirting with 3%. It’s setting up for a potential peak in yields and accelerated dollar decline.

Spiking yields in the second half of April have supported the dollar. Risks appear tilted the other way. U.S. bond prices are at elevated risks to short covering. Absent continued fuel from higher yields, the recent dollar recovery should stall and reverse. 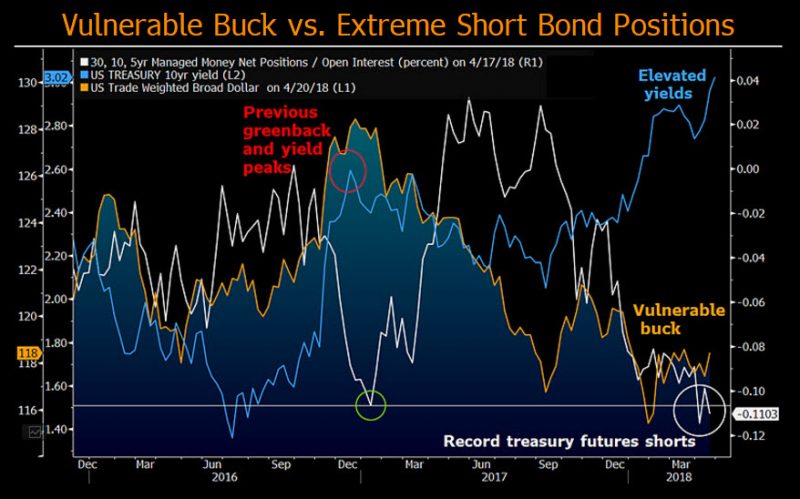 Divergent dollar weakness vs. Fed funds futures
The greater question for the dollar should be what it might take to stop sliding. Diminishing returns to increasing Federal Reserve tightening expectations indicate that the path of least resistance for the greenback is lower. The dollar is showing divergent weakness in 2018 despite fed funds futures indicating the greatest number of 25-bp rate hikes expected in the coming year since the inception of this tightening cycle.

The 12-week average of almost three rate hikes expected in one year may be peaking. Despite most of the rest of the world being well-behind the U.S. higher-rate cycle, it appears the dollar is on a path to an end-game: a reciprocal of the 20%-plus, two-year rally that lasted until the first hike in December 2015. 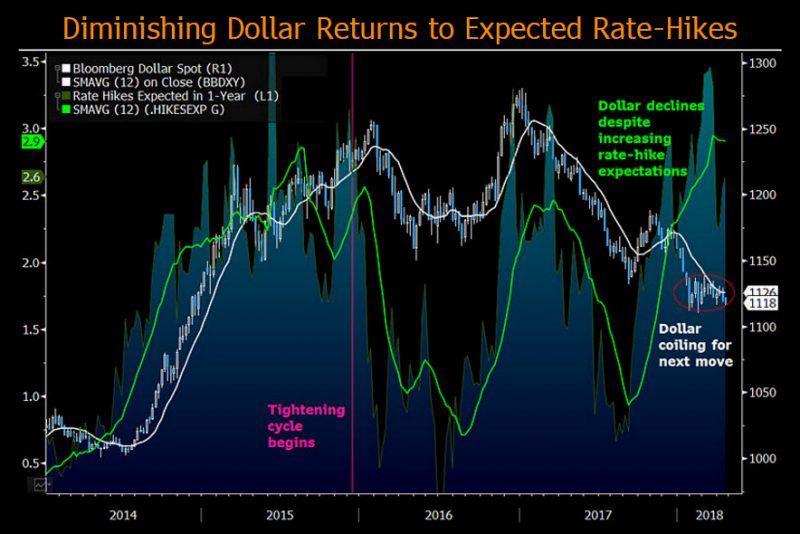 Commodity inflation beta normalizing
Commodities appear in early catch-up days to their typical relationship with inflation. Since 1991, the Bloomberg Commodity Index (BCOM) total return has averaged 7.3% above it 60-month mean vs. 5.6% for the consumer-price index. Still about 10% below its mean vs. 4% above for CPI, commodities are just recovering from the crude-oil-led 75% price plunge in 2014-16. It’s the beta of commodity performance vs. inflation that should matter most for investors.

On a comparative five-year-mean basis, commodities have about a 13x beta to CPI and 0.83 correlation. The beta is the same but the correlation is lower (0.71) when measured annually the past 26 years. In 2016, the 40% trough below this mean was the steepest in more than 50 years. 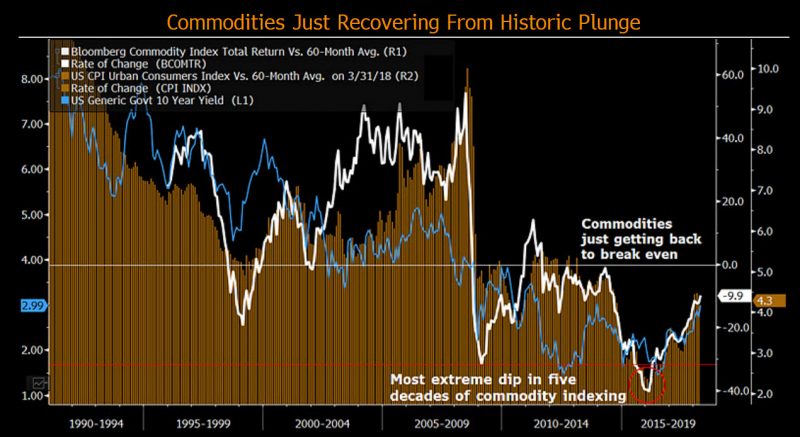 Commodities taking baton from stocks with inflation
Global economic reflation should help commodities seize the performance baton from stocks. Our graphic depicts U.S. equities performing about as well as possible, coincident with the rising tide vs. an early stage commodity recovery. More than 24 months removed from the commodity nadir compares with about a decade-long S&P 500 rally, which is just backing away from the upper end of the CPI-guided trend channel.

Global central banks are succeeding in their mission to increase inflation. Commodities should be a primary beneficiary, notably if currency wars result. Stocks and bonds may be the asset classes most exposed to inflation. Equities may be affected, along with other capital assets, with rising bond yields.

Previous Post What You Need to Know about China and American Soybeans.